There’s so much to see and do in Danang, the largest city in Central Vietnam. Let Grand Mercure Danang be your base and partner for discovering all that this region has to offer.

Danang Beach: With white sand, crystal clear waters, gentle waves and mild year-round climate, Danang is quickly becoming a favourite holiday destination for travellers from Vietnam, Asia and the world over. Whether your passion is soaking up the rays or enjoying water sports, beautiful Danang Beach has what you seek. Grand Mercure Danang offers a free daily shuttle service to the shore, located 3.5 km to the east.

Sun World Danang Wonders: Formerly called Asia Park, this entertainment complex is an amusement park and cultural centre located just 3 km from Grand Mercure Danang. Whether travelling as a couple or with the entire family, there’s something for everyone. Go on thrilling roller coasters. Ride the 115-metre Sun Wheel for unparalleled views of Danang city. Shop for souvenirs, jewellery, clothing and artisan handicrafts. For extra convenience, take advantage of the free shuttle bus from and to the hotel.

Cham Museum: The kingdom of Champa was founded in 192 C.E. and lasted until 1832. Explore the remnants of this ancient culture at the Cham Museum, which houses hundreds of intricate sculptures dating from the 7th to 15th centuries. Our complimentary shuttle service quickly transports you to and from the museum, located 3 km away from the hotel.

Han Market: For those who love treasures, bargains and a taste of local life, this indoor market 3 km north of Grand Mercure Danang is a must-see. The ground level and areas just outside the large building bustle with vendors hawking fresh produce, seafood and meat. Come hungry, as the food court is filled with a tempting selection of Vietnamese snacks and drinks. The upper level sells non-perishable goods, including gorgeous fabrics which you can have custom-made into an ao dai, the traditional Vietnamese attire. The hotel’s free shuttle service stops at Han Market every two hours.

Marble Mountains: Actually a collection of five rocky outcroppings, named after the ancient elements of wood, fire, earth, metal and water. Climb to the summit for access to pagodas and for impressive views of the city and coastline. Within the mountains are hidden caves and tunnels, used by Vietnamese troops during the war. A visit to this scenic spot is an ideal half-day trip in Danang.

Son Tra Peninsula: Jutting gently into the South China Sea, Son Tra Peninsula is a beautiful patch of land with lush hills, winding roads, amazing views, a charming fishing village and ancient banyan trees. If you drive to the Monkey Passage, you may catch a glimpse of the rare red-shanked douc langur. The hotel can provide transportation for a day trip to the peninsula, located 20 km away.

Ba Na Hills: Some 40 km west of Danang, rising 1,487 metres above sea level, Ba Na Hills enjoys a cool climate and spectacular scenery. French colonists established this hill station in the early 20th century, and the ruins of their villas can still be seen. Today, Ba Na Hills is a fully developed resort town – built to resemble a medieval European village – accessible by an impressive system of cable cars.

UNESCO World Heritage Sites: Central Vietnam is endowed with a rich cultural heritage that has been carefully preserved so generations of visitors can continue to enjoy it. Use the hotel as a base for a day trip to Hoi An, 30 km to the south. Stroll the charming quays of the Thu Bon river. An assemblage of beautifully preserved architecture – built by early Japanese, Chinese and European traders – dot this ancient coastal town.

The Imperial City of Hué, located 120 km northwest of Danang, served as the capital of unified Vietnam from 1802 until 1945 – the reign of the Nguyen dynasty, the last ruling family. This heritage site is known for its urban planning, wonderfully preserved architecture and natural landscape. Water from the Perfume River fills the moats and meanders throughout this feudal city.

Stay in touch and connected to all the news and happenings.

View all photos
Book a room 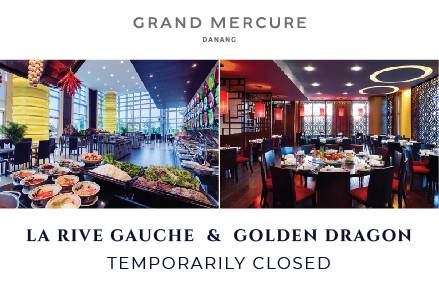 Due to COVID-19, GRAND MERCURE DANANG has had to temporarily suspend operations at LA RIVE GAUCHE and GOLDEN DRAGON restaurant.

As we navigate these difficult and unpredictable times, our top priority remains the safety and wellbeing of our guests and team members.

We will resume operations as the situation improves and an update on the re-opening of LA RIVE GAUCHE and GOLDEN DRAGON restaurant will be communicated in due course.

Our thoughts remain with everyone impacted and we look forward to welcoming guests and visitors back to LA RIVE GAUCHE and GOLDEN DRAGON restaurant soon.


The best of Grand Mercure with Accor App Close